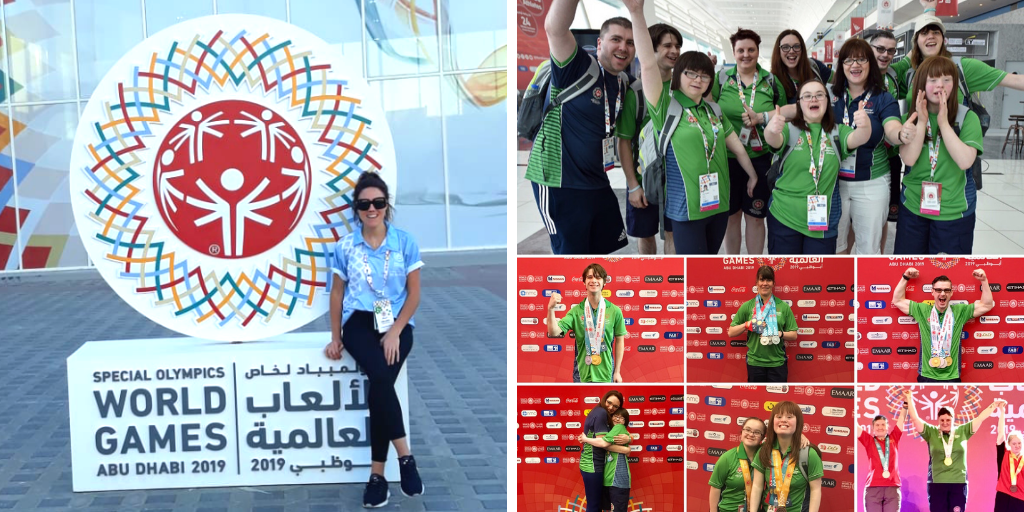 As I boarded the bus to Dublin on a chilly March morning, my journey to Abu Dhabi had begun. I knew I was heading off on what would be a memorable experience, but what I did not realise was the life-long friends I would make, the sense of pride I would feel and the absolute amazement I would have watching so many athletes achieve something that truly means the world to them.

On March 14th, 2019, Abu Dhabi lit up as more than 7,500 athletes from 190 nations worldwide arrived proudly sporting their country colours. Accompanied by their families, 3,000 coaches and over 20,000 volunteers, the excitement and bustle of the Special Olympics 2019 World Summer Games had begun.

As THE world’s largest humanitarian and multisport event in 2019, the games saw an action-packed week of sport, with athletes demonstrating their incredible courage, unwavering determination and sheer joy at representing their country at the highest level, on a world stage.

I had the honour of travelling to the games, alongside 74 Team Ireland volunteers, as part of the Special Olympics Ireland media team. We were all volunteering for different reasons, but the motivation was the same: we were there to help give these athletes the attention and notice they more than deserved. We were there to tell their stories during the games, to capture their achievements, their wins, their moments of glory. However, the athletes we were there to help, in fact ended up touching our lives in more ways than we could ever help them.

It was impossible not to be overwhelmed watching these athletes, who had worked hard and trained almost daily, compete and win at this professional level. Watching them participate and seeing the sense of pride across all the faces of their families, watching the comradery between the athletes, the commitment from the coaches and the sense of achievement throughout the team was amazing.

Summed up, I can only describe my overall experience as ‘Uplifting.’

The Games ran across multiple ultramodern venues and I was based at ADNEC, a state-of-the-art facility nestled in the heart of Abu Dhabi. As part of the media team, we were each assigned a sport to cover, with mine being gymnastics. Team Ireland had seven gymnasts competing, seven absolute stars:

There was a strong sense of pride as I sat amongst a sea of support, cheering each of them on. The determination, professionalism and competitiveness, was inspiring. There were no hidden agendas, no stress. Just pure joy, love and enthusiasm for life and their sport.

As the days went on, and I watched in awe at the skills on show, a shift came over me. We were meant to be there to motivate the athletes, but they were motivating us. In one instance a young athlete turned toward the crowd and started raising his hands to have us cheer more. He wasn’t doing this for himself, but for another athlete. It was in this moment that I realised the importance of their sport to the athletes, the importance of the Games to them and their families. I thought to myself I wonder if I would have the same unselfish support for others…

“Let me win. But if I cannot win, let me be brave in the attempt.”

My role varied throughout the day(s), but primarily I was responsible for live updates on the gymnasts’ journey – via @GymnasticsSOI – from divisioning stage, through competition to the medal ceremonies.

All kinds of extraordinary events took place across the ten days, and not all of them were on the courts or pitches. We had traveling ROI National media - including INM, Irish Times, RTE News and Today FM and I, like the twelve media volunteers were responsible for helping to identify ‘newsy’ stories, prep the athletes, coaches and families for interviews and ensure the success of Team Ireland was shared with those back home.

As part of the media we were privileged to ‘all area access’, and privileged we really were. We got to sit courtside with the athletes, share a lunch table with the families and stand beside the coaches as they delivered inspiring words to their athletes. We also got up close and personal with any celebs or dignitaries visiting the Olympics (much to their dismay).

I helped to nab an exclusive interview with Canadian ‘Sk8er Boi’ singer Avril Lavigne for Henry McKean, aka NewsTalk presenter extraordinaire. Yet the star-studded moment that will stick with me forever was watching the surprise and elation on gymnast Eimear Gannon’s face as Special Olympics Ambassador Nicole Scherzinger approached the podium to present her with her medals. Her excitement, the delight in her face, the pride in her win, this moment will forever stay in my heart.

Another stand out moment was watching Lisburn’s ‘REA’ of golden sunshine – Sarah Louise Rea clinch her gold medal after a nail-biting final match that saw the star come from behind to defeat a formidable Thai opponent. Every emotion that joy brings was on show on the court that day, as her proud coach, tearful parents and jubilant teammates helped her celebrate a day she will never forget!

But most of all, I will always remember the banter and camaraderie between the Volunteers, especially The Wolf Pack, who all went above and beyond to make these games amazing! The goodwill, dedication and effort that everyone went to each and every day to enable the brave athletes shine through was inspiring.

It takes a lot of hard work, dedication and commitment for Athletes and their Coaches to prepare for the Games but Team Ireland’s hard work paid off as the 91 Irish athletes won a massive 86 medals between them including 30 gold, 29 silver and 27 bronze, which has been heralded as one of the most successful ever for the team!

Throughout my experience at the games, I have watched athletes take tremendous steps both in their abilities to compete in the sports and also their interactions with everyone around them. I watched in awe as not once did they allow their frustrations to overcome their effort or fail to see achievement in their performance, no matter the result. Each and every one of them rose to the occasion and showed the world what the Special Olympics stand for.

At the opening ceremony Crown Prince of Abu Dhabi Mohammed bin Zayed Al Nahyan summed up the games for me with his remark:

“Today, with your presence and participation, we send a message to the world that nothing is impossible when there is determination. Life is tough, but determination can be tougher.”

With friends for life made, volunteering with Special Olympics Ireland has definitely been one of the most amazing things I’ve ever done!