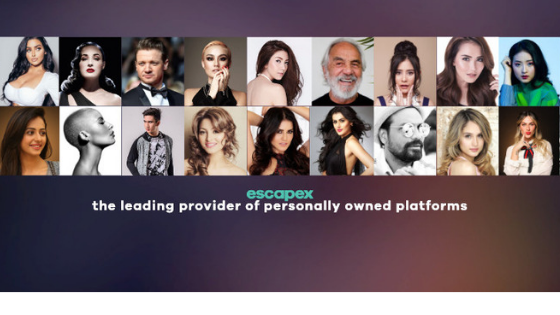 With the rise in social media providing immediate and direct access to the lives of the rich and famous, gone are the days of fan mail and celebrity post boxes.

Through the lens of Instagram, Facebook and Twitter, the regular person can now engage instantly with their celebrity idols. With a few simple taps on your phone, you can ‘escape from reality’ and transport yourself virtually into the world of your favourite celebrity or influencer.

As the demand for content grows and as more and more celebs are wanting to bring their fans into their everyday lives, the access to content is endless.

AND NOW with a new app on the scene, that is taking social media by storm, we now have access to a celebrity’s world like never before.

‘Escapex’, allows the user to engage directly with their fans and for them to have exclusive access to content only shown on the platform. From actors, sports stars, models and musicians, celebrities who have jumped onboard the platform include Jeremy Renner, Amber Rose and Alessandra Ambrosio.

The platform gives the celebrity / influencer the ability to create their own personalised app, that is totally dedicated to their content, ‘Escapex’ focuses on the idea of smaller and more private collectives rather than ‘Big Social Media.’ It provides influencers with ownership over their content and photos, as well as enabling them to have more control over what they post and frees them from the shackles of the algorithms.

Founded in 2015, ‘Escapex’ has raised over $18 million in venture funding, has expanded across 18 countries and amassed an audience of over 3.5 billion across 350 celebrity accounts.

Although the celebrity-focused apps won’t be for everyone, for some celebs and their superfans, Escapex is exactly that – an escape from reality.