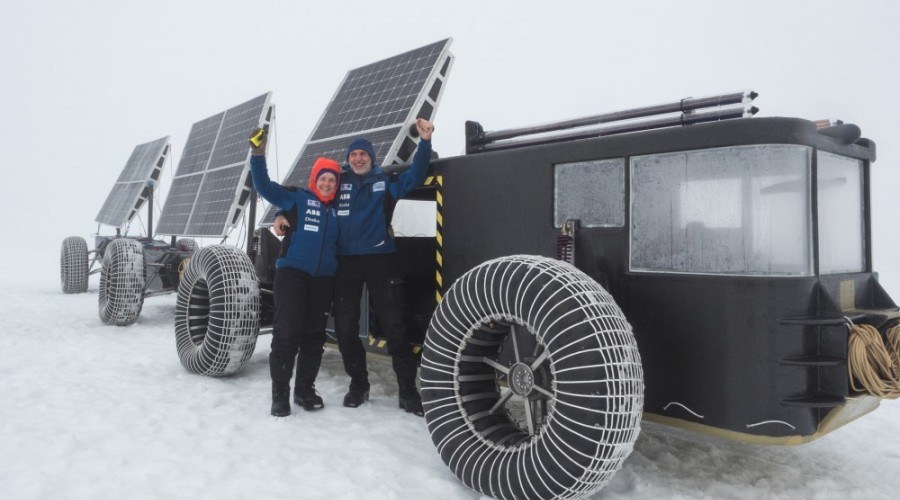 Dutch couple Edwin and Liesbeth ter Velde will venture across Antarctica in a self-made, 3D printed truck built from recycled waste at the end of this month.

Combining zero-waste living along with solar energy, the couple will take on the freezing cold temperatures to raise awareness of the impact of single-use plastics, with the aim to encourage people to reduce their use of disposable products.

In the world we currently live in, more often that not, plastic is used for single use items and due to its disposability, it is often designed to be thrown away. Instead of seeing plastic as the throw away item it has become, the idea behind Clean2Antartica is to utilise the plastic waste, turning it into the foundation of the project.

The ‘Solar Voyager’ is built from industrially recycled Polyethylene Terephthalate filament which has been developed into small compacted shapes called HexCores. These HexCores have then been put together to build the Solar Voyager, which is 16 metres in length and weighs in at 1,485 kilograms. During the voyage, the vehicle will be powered by energy from 10 bifacial solar panels and will contain enough food to support the couple for 47 days.

Each aspect of the vehicle has been designed with the ideology of sustainability behind it. Clean2Antartica highlight that despite the failures and setbacks, they have continuously learned and modified their approach to the vehicle:

“Building together with partners and experimenting is the model for a circular economy, the Solar Voyager proves that we don't have to invent new technology, but rediscover what we can do with it. We have all the technology we need for a sustainable world, now it’s time to apply it.”

The team have projected that the journey from base camp to the South Pole will take 16 days, during which time the couple will be tracked by a mission control centre.

The couple will head off from base camp on 26th November and you can follow the adventure as it unfolds here.